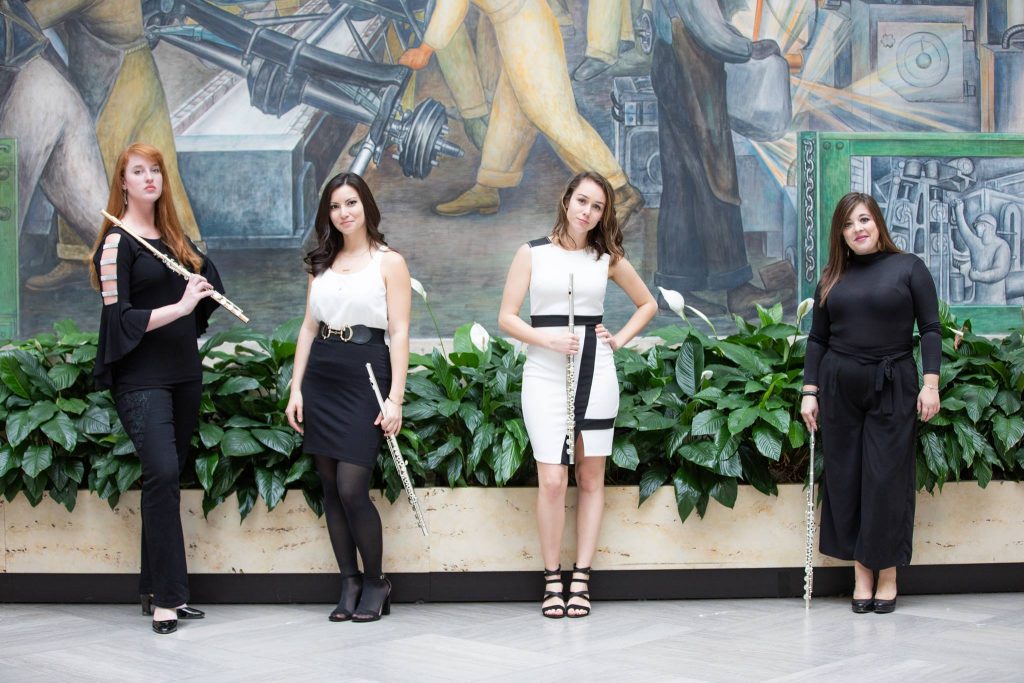 On March 19, BETA Quartet will be hosting an ICU Compassion Concert. This concert will be a benefit concert to raise funds for the Society of Critical Care Medicine. They will be premiering 20 new pieces written for flute quartet, all of which are dedicated to ICU workers around the globe in the midst of the pandemic.

In the summer of 2021, partnering with long-time sponsor Mr. Jon Cummings and feeling the heartache and difficulties of the COVID-19 pandemic, BETA Quartet launched our first Call for Scores. Like so many others, we were deeply moved by the heroism of those who have been on the frontlines of battling COVID, and we wanted to use music to honor and express gratitude to Intensive Care Unit staff and Health Care Workers for their incredible grit, bravery, sacrifice, and compassion.

The Call for Scores asked composers to write a short fanfare for flute quartet that is meant to honor ICU workers around the world. We felt that asking for a fanfare, a form of music often used for dignitaries and people who deserve great respect, would be a way we could express our gratitude through music.

We received twenty compositions from composers in seven different countries including USA, Peru, Greece, France, Germany, UK, and Thailand. Judged on originality and musical depth, two winning compositions by Greek composer Evgenios Anastasiadis and Thai composer Vorapon Mathawaphan were selected to receive their virtual world premieres. Thanks to Mr. Cummings, these composers also received a cash prize. These fanfares can be heard here.

We are premiering the new works in a benefit concert to raise money for the Society of Critical Care Medicine (SCCM). This project fulfills our vision of championing new music for flute quartet and using music as a vehicle for creating positive change.

This ICU Benefit Concert will be held on March 19th, 2022 at 7:30 PM EST at Fairmont State University in West Virginia. The concert will also be livestreamed through BETA’s Facebook and YouTube pages. We will be accepting donations, all of which will go directly to SCCM.

Described as “chamber music at its finest” by Kenneth Tse and “unique and virtuosic” by Barbara Siesel, BETA Quartet is an award-winning ensemble comprised of flutists Eftihia Arkoudis, Tatiana Cassetta, Alyssa Schwartz, and Meg Brennan. BETA is dedicated to exploring and promoting the cutting edge of modern flute music by premiering and performing works by living composers around the world. The ensemble is actively engaged through concerts, masterclasses, and educational outreach across the country and abroad. As strong competitors, BETA has won First Prize at France Music Competition 2°, West Virginia Music Teachers National Association Chamber Music Competition, Flute Society of Kentucky Quartet Competition, and advanced to the semi-finals of the prestigious Fischoff National Chamber Music Competition. The group has performed and presented workshops at the National Flute Association Convention, Florida Flute Association Convention, the Mid-Atlantic Flute Convention, the Flute Society of Greater Philadelphia, and the WVU International Flute Symposium.

Following the release of their self-titled debut album (2017), BETA commissioned Detroit based composer Marcus Elliott to write a work celebrating the feminine divine (2019) and recorded the world premiere of Nuraghi Warriors Dance (Ples Bojevnikov Nuraghi) composed by Anže Rozman and dedicated to the group (2020). Both albums are released with Merandi Records and are available through Spotify, iTunes, YouTube and www.betaquartet.com.

Our Monthly Edition Has Special Promotions and Flute News. Don't Miss Out!