An Interview with Jeffery Zook 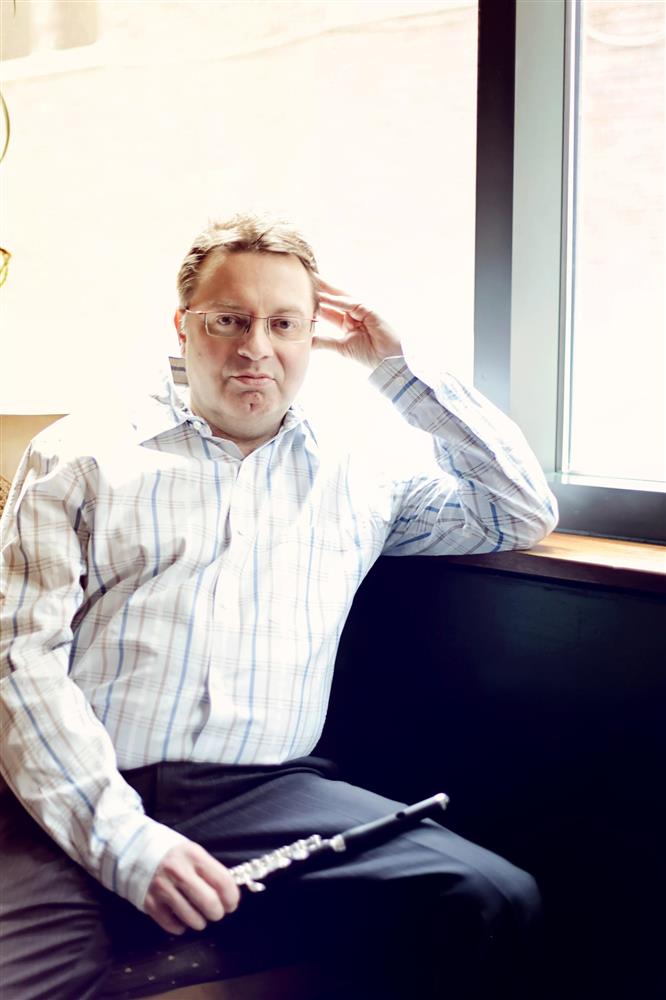 On a perfect 75 degree late summer morning in Michigan, I recently had the honor of sitting down with the talented and charming Jeffery Zook, flutist and piccoloist with the Detroit Symphony Orchestra since 1992. I looked out upon the beautiful, perfectly manicured garden in the backyard of his home The Cambridge Conservatory, sipped a delicious cup of coffee he had so generously offered me, played with his adorable miniature pinscher Dexter, and thoroughly enjoyed some friendly conversation. Anyone who has had the privilege of spending time with this distinguished musician will speak of his friendly demeanor, sincere generosity, good-spirited humor, and most of all his passion for music. After a bit of catching up we discussed his upcoming performance at the 2017 NFA Convention in Minneapolis.

HN: Tell me about the composition.

JZ: OK, so I guess it was a year ago I got an email from the program coordinator for the NFA asking me if I would be willing to appear at the Gala Concert on Saturday night at this convention playing this particular piece the Egil Hovland Concerto for Piccolo and String Orchestra. I had no idea what this piece was so I clicked on the YouTube link that he sent me. It’s been recorded on YouTube by this wonderful piccolo player Nadia Guenet. So I clicked on the link and I was instantly excited. I really was like “Wow, what a beautiful piece.  What a great showcase for the piccolo.” And I didn’t know it so I thought this was something I could really sink my heart in for the performance.

HN: Tell me more about the style of the piece.

JZ: It was written in 1980. When I first listened to it I thought it was very folksy and it turns out that this composer is known for a wide range of styles and this style is called Norwegian Romanticism. Which obviously means he uses a folk tune basis for the melodies and the harmonies.

HN: Have you faced any challenges in preparing this concerto?

JZ: It’s very beautiful and melodic and very simple in a lot of ways but then all of a sudden he gets highly virtuosic just for short periods of time so I’m just slowing working up runs, making sure they’re in my fingers that kind of stuff but no it’s actually it’s a pretty straight forward piece.

I performed the first movement with pianist Rudolf Ozolins at Sharon Sparrow’s flute retreat recital a couple weeks ago.

HN: Once you get to the convention how much time do you have to work with the string orchestra?

JZ: I think I get a rehearsal with them for an hour and a half on the first day of the convention on Thursday and then a run through maybe on the day of the performance. It’s a pickup from the Minnesota Orchestra and the St. Paul Chamber Orchestra conducted by Ransom Wilson.

HN: So you’ve already presented the first movement, do you have anything planned to present the other movements leading up to the final performance?

JZ: Probably while I’m on tour I’ll play it for my colleagues like Roma (Duncan, guest piccoloist from the Minnesota Orchestra and a former student). I told her I’d play it for her. So I’ll be practicing for the next three weeks in my hotel room. That’s the challenge of it is that for the next three weeks I’m going to be traveling all over Asia with the DSO, in Japan and China living in hotel rooms and I have to stay focused and concentrate on this so I’m going to be every day practicing it but like I said I will get little mini-run throughs when I can. When we’re at a hall or something like that.

HN: How does that affect preparing your music for the symphony while you’re on tour?

JZ: Oh I already know that.

HN: (Laughing) What are you playing? All pieces you’ve done many times before?

JZ: No actually because I’m playing assistant principal flute on tour so I’m playing a different part totally. For example, Roma’s playing principal piccolo part on the Copland symphony and I’m playing the second piccolo part next to her. She was my student at one point so she said it kind of feels a little weird sitting first piccolo next to me but it’s very special having her sitting next to me sounding beautiful on the solos and me supporting her from the second piccolo. So it’s kind of new for me to play that part. Other than the Copland Symphony number 3, they’re playing Tchaikovsky’s 4th Symphony and after having played it like a million times I don’t have to even be on stage for it!

HN: So you’re mainly playing flute on tour and then coming back and playing a piccolo concerto?

HN: Interesting. But for you that’s nothing, right?

HN: What are you most looking forward to at NFA this year?

JZ: One of the things I’m looking forward to is the Ervin Monroe tribute concert. I will be performing with Sharon Sparrow, Amanda Blaikie, and Brandon LePage in a quartet. We are doing a surprise piece that I found on YouTube.

I remember my first convention I went to in 1982 when I was in high school. Ervin Monroe was the presenter at that convention. I’d never been to a convention before, It was here in Detroit. So it’s kind of cool that at this convention he’s being honored all these years later after having been my teacher and also my colleague in the orchestra for several years.

HN: Is there anything else you’re looking forward to at the convention?

JZ: I think I’ll just be practicing and getting ready for my concerto.

HN: What’s been the most enjoyable part of working up this concerto?

HN: Is there anything specifically that the audience should look for when they come to watch you play this wonderful piece of music?

HN: Ooh I’m glad I asked. Tell me about your new suit.

JZ: (Laughing) I don’t know. I still have to buy it.  That will be in that eight day period between returning from the tour and leaving for the convention. I was supposed to get to it this week but I didn’t do it.

HN: So you rush back from Asia and you’re jet-lagged and you’re going to be buying a new suit, preparing a concerto, and heading to Minnesota.

JZ: When I got the e-mail a year ago I was really shocked and honored. I remember going to the Gala Concert in 1982 and being blown away by these great soloists. I never thought that I would be on the gala concert.

Jeffery Zook has been a member of the Detroit Symphony Orchestra flute section since 1992. His formal musical studies began at the Interlochen Arts Academy and continued at the University of Michigan. In 1988, he received the coveted Recitalists’ Diploma from the Royal Academy of Music in London. His teachers have included William Bennett, Trevor Wye, Judith Bentley, Jacqueline Hofto and former DSO piccoloist Clement Barone.

Mr. Zook lives in Pleasant Ridge with his partner David Assemany and miniature pinscher Dexter. They have named their renovated Dutch Colonial home The Cambridge Conservatory a venue which has hosted recitals, workshops, musical feasts and fundraisers.

Heather Neuenschwander has a Master’s Degree in Flute Performance from Oakland University and a Bachelor’s Degree in Music Education from Wayne State University. Before beginning her degree at Oakland, she taught middle school and high school band, choir and music appreciation in Michigan and Illinois for five years. She has performed with the Oakland Symphony Orchestra directed by Dr. Gregory Cunningham and the Michigan Philharmonic Orchestra under the direction of Nan Washburn. She has also performed in masterclasses for Marina Piccinini, Laurie Sokoloff, Nicola Mazzanti, Jennifer Clippert, Sharon Sparrow, and Jeffery Zook. In February 2015, Heather performed the Ibert Concerto with the Oakland Symphony Orchestra as a winner of the David Daniels Young Artist Concerto Competition. She also received the Matilda Award for Outstanding Graduate Student in Instrumental Performance in 2015. Heather currently resides in Royal Oak with her husband Josh and her sons Alex and Zach.

An Interview with Hannah Hammel

An Interview with Melissa Keeling

Heather Neuenschwander interviews Melissa Keeling about her book “The Glissando Flute: A Handbook for Composers and Performers”, the Glissando Headjoint... read more

Don’t Forget the Piccolo! An Interview with Jeffery Zook

Over the relaxing Memorial Day holiday weekend, I had the joy of speaking with Detroit Symphony Orchestra Flutist and Piccoloist... read more

An Interview with Robert Dick

An Interview with Robert Dick We recently had an opportunity to ask world renowned flutist, performer and composer Robert Dick about... read more

An Interview with Amanda Sparfeld

I met up with flutist Amanda Sparfeld at a local trendy restaurant.  While eating deliciously messy burgers, we discussed her... read more

Use Code FREE25 for free shipping for orders over $25! *U.S. Domestic Ground Only. Code not valid for trials. Dismiss